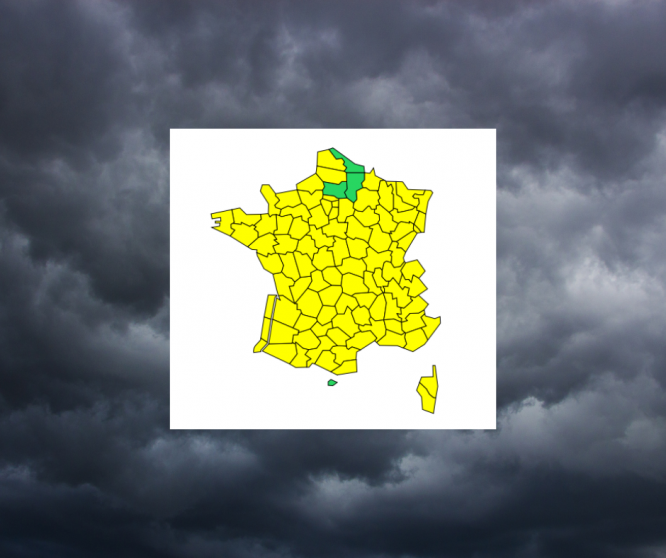 Alert as thunderstorms head south-east and north-west of France

France is experiencing a bout of wet weather today (November 3) and a storm and possible flash floods are expected to hit southeastern regions this afternoon.

Strong winds are moving along the Atlantic coast, with gusts of 70 to 90 km/h and above 100 km/h in some areas.

Read more: Winds up to 140km / h: A stormy episode will hit the west of France

The rains are more and more abundant over Languedoc and Provence this morning, and are spreading over Provence-Alpes-Côte d’Azur and the Alps.

The entire PACA region is under yellow alert for thunderstorms and the risk of flash floods.

National forecaster Météo France has predicted 20-40mm of rain will fall with 60mm in some places.

The Var prefecture urged people to be “vigilant when traveling and to exercise caution near bodies of water”, as well as warning drivers never to enter even a partially flooded road .

#METEO83 | the #Var is placed by @VigiMeteoFrance in yellow vigilance thunderstorms and rain-flooding with weather situation to watch from Thursday 3/11 at 2 p.m.
⚠️ Risks of combined strong sometimes accompanied by wind and hail.
The press release from the prefecture ⤵️ pic.twitter.com/SFSolbfAPw

However, Météo France specifies that this storm cannot be qualified for the moment as a “Mediterranean episode”, which causes particularly intense precipitation in the south of France.

The storm is expected to peak tonight and continue overnight, although conditions will gradually calm.

Regions of Brittany and Pays de la Loire are also under a yellow storm warning today, with weather conditions also expected to deteriorate in the late afternoon.

A total of 93 departments are today on yellow weather alert, with the west and the north of France being on high wind alert.

These alerts should remain in place throughout the night and into tomorrow morning.

You can find out more about the alerts in place in your region on the Météo France website.

Should I do something?

A yellow weather alert does not require residents to take any particular action, but rather encourages awareness and caution.

For example, if you must go out, be aware of road conditions and try to avoid forests and bodies of water.

Do not touch electrical cables that could fall to the ground and secure property that could be damaged by the storm.

Pas-de-Calais tornado: why isn’t it an official “natural disaster”?