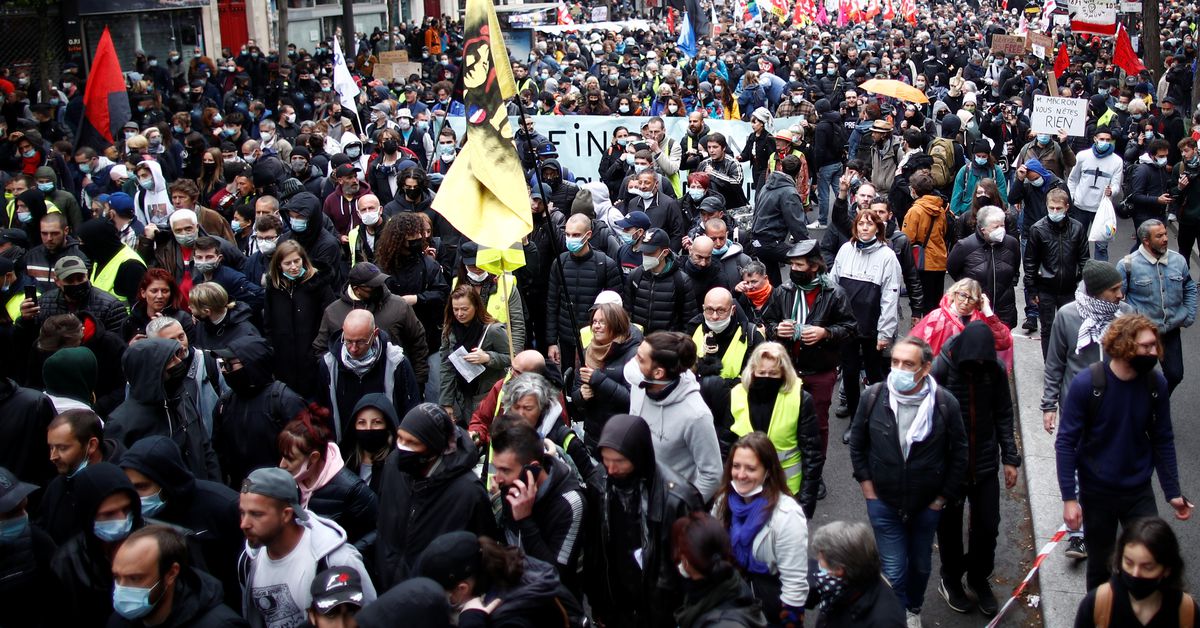 Arrests in Paris as thousands join May Day protests across France


Hooded and black-clad protesters clashed in Paris on Saturday as thousands joined in traditional May Day protests across France to demand social and economic justice and voice their opposition to government plans to change unemployment benefits.

Police made 46 arrests in the capital, where garbage cans were set on fire and the windows of a bank branch were smashed, temporarily delaying the march.

More than 106,000 people marched across France, including 17,000 in Paris, according to the Interior Ministry.

The unionists were joined by members of the “Yellow Vests” movement, which sparked a wave of anti-government protests three years ago, and by workers from sectors hard hit by pandemic restrictions such as cultivation.

The marchers, mostly wearing masks that comply with coronavirus rules, carried banners that read: “Dividends, not unemployment benefits are the income of the lazy” and “We want to live, not survive.”

The police headquarters, which has deployed 5,000 agents in Paris, said it had prevented the anarchists of the “Black Bloc” from forming a group. Three police officers were injured in Paris.

People attend the traditional May 1 trade union march amid the coronavirus disease (COVID-19) outbreak in Paris, France on May 1, 2021. REUTERS / Gonzalo Fuentes

About 300 gatherings were organized in cities like Lyon, Nantes, Lille and Toulouse.

Far-left leader Jean-Luc Melenchon and far-right leader Marine Le Pen, both of whom plan to challenge President Emmanuel Macron in next year’s presidential election, attended the events of May 1 .

“My wish for the working class is that they can be freed from the fear of being unemployed,” Melenchon said during a protest in Lille, adding that he hoped to return to the northern city as president .

Le Pen, who had previously laid a wreath in Paris on the statue of Joan of Arc, the nationalist symbol of his party, warned of “total chaos” if Macron is re-elected.

Macron, the former investment banker who won the presidency in 2017 by promising a new way of doing politics, has seen his reform agenda bogged down in struggles with the unions, as the pandemic halted the planned overhaul of its retirement system.

France, which has the eighth highest death toll from coronavirus in the world, will begin lifting its third pandemic lockdown restrictions from Monday after infection rates drop.

Dozens of tourists fined for stealing sand, shells and rocks from Sardinian beaches |…