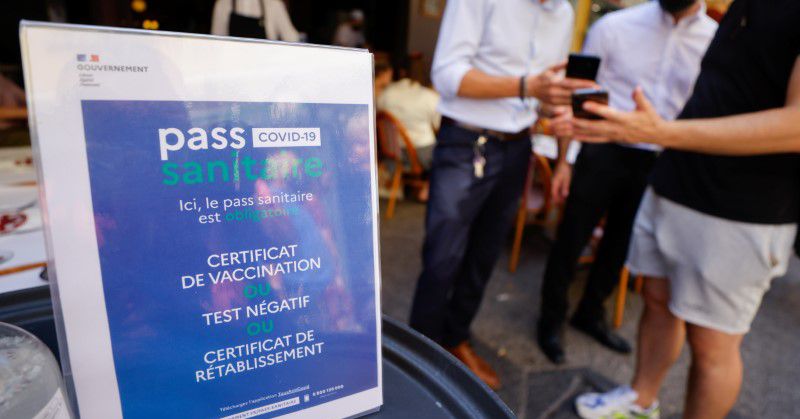 PARIS, August 9 (Reuters) – The French morning ritual of a coffee and a croissant became more complicated on Monday as people had to show proof of vaccination or a negative COVID-19 test before sitting in their cafe preferred, although many restaurants are ignoring the new rules.

A health pass must now be presented to eat in a restaurant, drink in a bar, access non-emergency care in a hospital or travel on an intercity train, as part of a government campaign to contain a fourth wave infections.

President Emmanuel Macron unveiled the edict last month with a clear message: get vaccinated. Vaccination rates jumped as the French risked being denied some daily pleasures, but it also sparked a wave of street protests.

“It’s simple, we downloaded an app … so we scan the customers’ QR code, and if it’s valid, they can come in. And if it’s not valid, we can’t serve them” , said Romain Dicrescenzo, director of Café Vrai Paris in the Montmartre district of the capital.

He said he turned back dozens of people – some who forgot the pass as well as those who had not been vaccinated.

Cafe and bar owners caught flouting the rule face a warning followed by a 7-day shutdown order for the second offense. Two more tickets could lead to a one-year prison sentence.

A man shows his COVID-19 health passport at a restaurant as France imposes stricter restrictions where proof of immunity will now be required to access most public spaces and travel by intercity train, in Nice, France, on August 9, 2021 REUTERS / Eric Gaillard

Despite this, of the 10 restaurant and cafe owners polled by Reuters in Paris on Monday, half said they refused to perform health card checks. Police would take a lenient stance at first, the Home Office said.

Some other European countries such as Italy have introduced similar health passes, but France’s is the most comprehensive. Opponents of the pass say it infringes on their freedom and discriminates against those who do not want the COVID vaccine.

Data from the Ministry of Health showed that nine out of ten COVID patients admitted to intensive care at the end of July had not been vaccinated. A majority of French people support the health pass, according to polls.

Health card checks were also carried out at the Gare de Lyon in Paris. Checks on trains will be random and carried out on one in four long-distance trains on Monday, the transport minister said.

Cafe customer Issam Fakih, an oil logistics employee, said: “I’m a little divided on the health pass to be honest. I got the vaccine because in my job it’s important… Now the pass is something that is turned on my phone, so I don’t mind when asked. “

But he added: “I think it’s still an attempt to restrict some freedoms, but maybe some reactions are a bit exaggerated.”