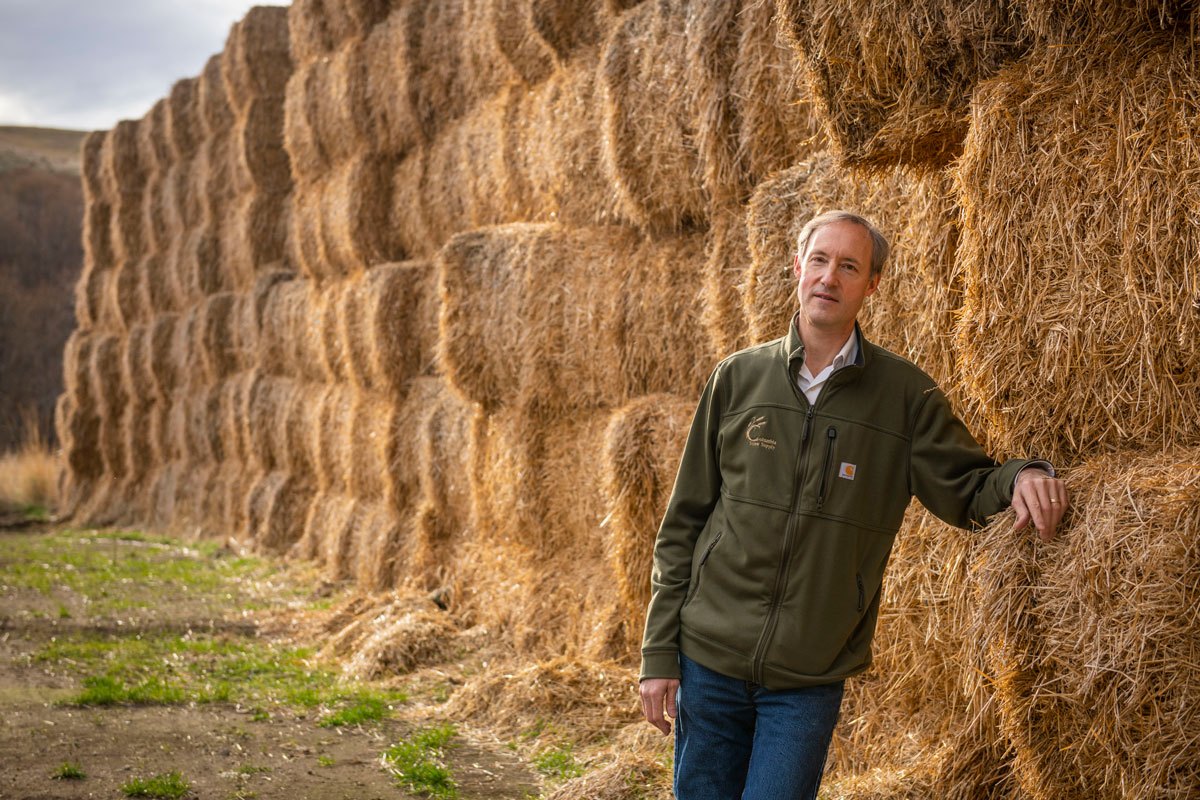 Ben Rankin ’87 has a new use for agricultural waste.

IIn the United States alone, about 44 million acres of cropland, an area about the size of Oklahoma, is seeded to wheat. Wheat comes in dozens of varieties, and the farmers who grow it use many different techniques to plant and grow it. After harvesting the grain, however, they all face the same puzzle: what are they going to do with the straw?

Straw is the hard stalk that remains in the soil after the grain has been cut and harvested, and for most American farmers, a field of straw is a problem. You can set the field on fire, but it creates gargantuan plumes of smoke and carbon emissions. You can bury the straw in the ground, but this leads to erosion and interferes with replanting. You can baled straw for sale as livestock bedding, but unfortunately there is little demand for baled straw. Most often it is burnt or buried.

Ben Rankin ’87 helped realize a better idea. With a degree in English from Reed, he worked on the Seattle theater scene for many years after graduation before moving to the field of industrial material recycling. For example, wood-fired boilers that recover chemicals for pulp mills produce huge amounts of boiler ash, which is rich in silica, a key ingredient in cement. Then he heard about an intriguing project in eastern Washington and wondered if he could help.

Paper is usually made from wood, of course, but over the centuries it has also been made from papyrus, hemp, bamboo, bagasse, and even rags. Ben had contacts in the paper industry who were exploring a new process for making pulp, the precursor to paper, from straw.

With Ben’s help, they raised $ 190 million in funding and built a brand new factory near Starbuck, a farming community in rural Washington. Colombian pulp opened in 2019. It is the first in the country, and possibly the world, designed to make large quantities of high-quality pulp from straw instead of trees.

The lucky one in charge of supplying straw? It would be Ben, who set up a sourcing company with a business partner. “I use my Reed education every day,” he says. “A project like this has a bunch of stakeholders, sometimes with competing interests. You need to be able to communicate clearly, think quickly, identify solutions, find common ground, and think analytically – that’s what I taught Reed when talking about Plato or of Renaissance art.

Fortunately, the local community has been very supportive. Before the arrival of the mill, farmers burned hundreds of thousands of hectares of straw there each year, generating 45,000 tonnes of air pollution. “Producers are excited to have a new option,” he says. Now they can earn extra income through the straw.

Columbia Pulp and its partners are now turning straw into cardboard, napkins, tissues and paper—in fact, we used their paper to print the March 2021 issue of Reed Magazine.

The pandemic, along with typical start-up challenges, has temporarily halted production, but Columbia executives expect the plant to reopen in May. In the meantime, Ben has stored approximately 150,000 tonnes of straw bales, which are currently stacked 21 feet high for several hundred acres near the mill.

Fortunately, there is plenty of room there.