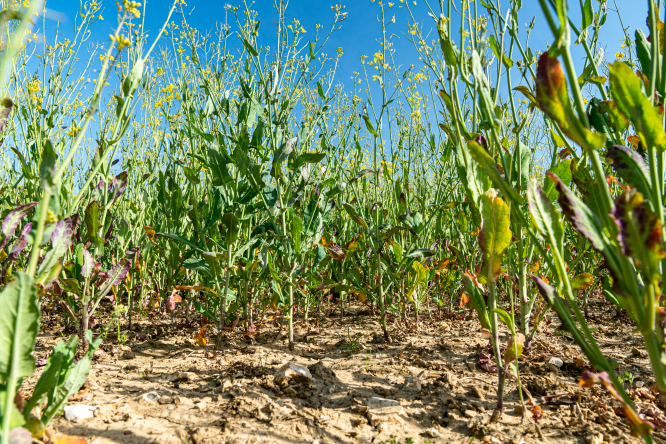 Drought alerts now expected for almost all departments of France

A quarter of French departments, including several in the north, are on drought alert, with record temperatures in May leading to water restrictions for individuals and farmers.

A total of 91 local drought ordinances are in place – for example, placing limits on garden watering, car washing and swimming pool filling. Almost all of France should be affected soon.

It’s not too late to act for the future

Heat waves, flash floods and structural damage to homes are among the expected consequences.

However, they say we can still make a difference.

Lola Vallejo, director of the climate program of the ecological think tank IDDRI, said: “We must stop the idea that it is too late to act.

“Yes, the goal [set by the Paris climate agreement] to limit the rise to 1.5C [above pre-industrial levels] is extremely difficult, given our insufficient action in the past, but the alternative is to make every effort to limit it to at least 1.6C or 1.7C, for example. Every tenth of a degree, every year, counts.

All experts welcome the fact that the new Prime Minister Elisabeth Borne has been given responsibility for “ecological planning”, whereas in the past the environment was considered a more subordinate role.

It is supported by two ministers, Amélie de Montchalin and Agnès Pannier-Runacher, even if several commentators claim that they lack experience or green credentials.

Since pre-industrial times, global temperatures have now risen by around 1.1°C on average worldwide.

She said that to reach 1.5°C we need to halve emissions by 2030 compared to 2010 and then be almost zero by 2050. It is positive that all countries have set targets since the 1990s, but global emissions still increased, except for a jolt during the pandemic which is now over, she said.

They have fallen in Europe but not enough.

Ms Vallejo said France had helped broker a package of green laws during its EU presidency.

The European Commission, meanwhile, has an “unprecedented” blueprint for green targets across all sectors called the European Green Deal.

President Macron has created the High Council for Climate to assess France’s climate policies, but he says France is not reducing emissions fast enough.

There is less electricity generation from fossil fuels than many countries, but still a heavy reliance on oil in transport, with more road transport than 10 years ago.

He said: “We had a really sincere exchange and are waiting to have further meetings to hear what decisions will be made,” he said.

They agreed on the need to have a lot of dialogue on the projects and to protect biodiversity.

Some commentators say the two ministers are inexperienced and have shown no past commitment to the environment. However, Mr Schwartz said: “We believe that people of good will can get things done. Elected officials have a capacity for work and dialogue and if they do what they say – and meet with us regularly and listen to us – we will progress. We will not make initial judgments.

He said the government aims to include all ministries, with the prime minister’s office giving each an “ecological roadmap”, with targets and monitoring.

Reassure those who fear change

To succeed, the experts all said that you have to reduce greenhouse gas emissions, increase greener energy and adapt to change.

Mr Schwartz said: “If we don’t, things will get worse.

“The goal is to convince people to change their rules and habits and to convince them that it is possible and that we are going to help, starting with the most vulnerable. We will also help companies, some of which fear change. We must listen to their fears.

“The Prime Minister has understood the need for this.

What can individuals do?

Ms Vallejo said greater use of electric power can be a solution, but only if it is produced in an environmentally friendly way.

Lowering your thermostat, driving slower, not lighting stores and billboards after 9:00 p.m., or not heating patios can also help.

Mr Schwartz said “the whole of society” must understand that we cannot “continue to do things the same way”. We need to be more “restrained” and share more.

For example, he said that it is not enough to replace all our gasoline cars with electric cars, because owning a personal car for seven billion is not viable. We need to walk and cycle and use public transport more and think about “fewer and shorter journeys”.

Cheap and environmentally friendly public transport is therefore important. “Resources are limited, so we can’t continue to want the kind of lifestyle ads we’re being sold. In all areas, we need to reflect on our practices and avoid consuming energy if we can.

Ms. Vallejo said our buildings needed to be well insulated but also well ventilated and with plenty of shade. You shouldn’t build on floodplains, and in some places you have to consider that you’ve built too close to the sea.

“With rising sea levels and waves, flooding and erosion, it will not be sustainable to live and work in these areas.”

Finally, agriculture is the key to water use since it represents around 70% of the fresh water used in France.

More efficient irrigation is needed and crops that use less, for example sorghum as opposed to maize.

Greener methods, including crop rotation and the planting of trees and hedges, can create healthier soils that will help store water better in soil and groundwater.

Ms Vallejo said reducing meat consumption would also help, although it was “an elephant in the room”. In the agro-food industry, the possibility of purifying and then reusing water – for example the water used for washing vegetables – is being studied at European level.

Do high temperatures in May indicate a hot summer ahead?

How to check water restrictions in your region of France

France: No more doggies in the window