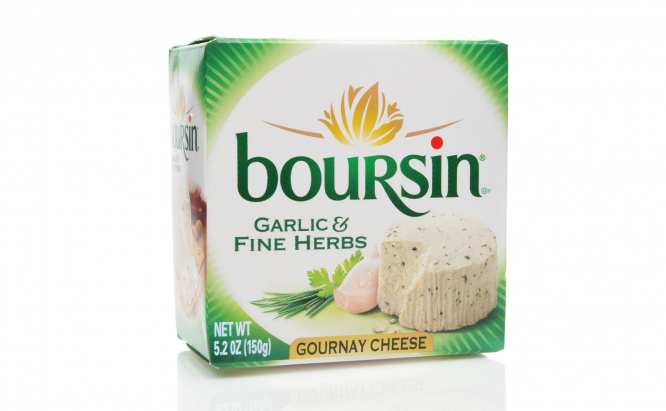 Rarely has the KISS principle (Keep it simple, stupid) been as effective in advertising as the famous slogan (on both sides of the Channel) to promote the soft herb/garlic cheese, Boursin.

‘Bread, wine, Boursin‘ is ingrained in the brains of all French people of a certain age and, indeed, of many in the UK too.

François Boursin founded his cheese dairy in 1957 and gave his own name to the brand in 1963.

It was invented in a dairy in Bonneville-sur-Iton, a village near Evreux (Eure, Normandy).

While Boursin is now classified as an “industrial cheese”, it was originally considered a fresh cheese.

Positioned on the market as cheese

The clever combination of bread and wine in the advertising slogan (which was very successful from the 1970s to the 1990s) meant that the consumer saw it as a cheese, and therefore ideal for the cheese dish or picnics at instead of dessert.

However, some forward-thinking mass marketers had already firmly established the brand in the consciousness of French consumers.

Read more: MAP: A tour of France in local cheeses – how many have you tried?

On October 1, 1968, a sketch featuring actor Jacques Duby – as an insomniac who repeated “Boursin! Boursin! Boursin!before indulging in Boursin in the middle of the night – was the very first of five brand advertisements authorized for the first time on French television.

Publicis, an agency founded in 1925, reserved the ads.

Talk seen as home to far-right – and now Kanye West