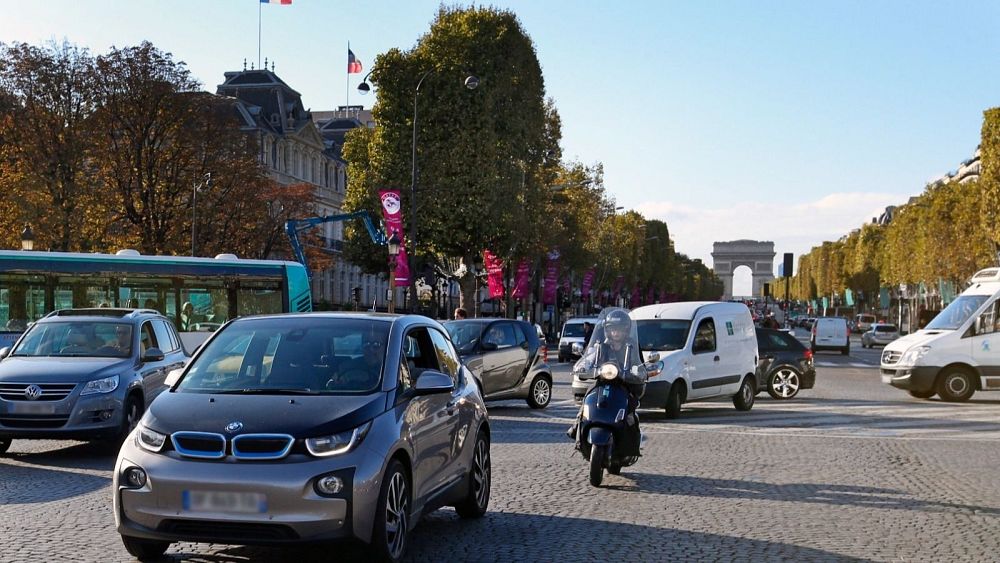 Car ads in France are soon to direct people to greener modes of transportation.

The new law will come into force for automakers from March, as President Macron seeks to tackle the country’s air pollution.

France is striving to reduce its greenhouse gas emissions by 40% by 2030 from 1990 levels, and its supporters believe the regulation is a step in the right direction.

Automakers will have a choice of three slogans to include in their TV, radio, print and online advertisements: “take public transport everyday”, “consider carpooling” or “for short trips, walking or commuting. cycling is preferable ”.

They should also use the hashtag # MoveLessPollute at the end of the message, which translates to “move and pollute less”. Companies that do not include the environmental warning will face fines of up to € 50,000 per advertisement.

How do discouraging ads fit into France’s climate plans?

The new law is one of a number of measures France is implementing to help meet its climate goals. Macron also increased the maximum eco-tax on the purchase of cars emitting high levels of greenhouse gases from € 30,000 to € 40,000 – with the cap set again at € 50,000 in 2023.

Ads will stop completely for vehicles emitting more than 123 grams of CO2 per km in 2028 – delayed due to pressure from the automotive sector. And no more gasoline vehicles will be sold in the country from 2035.

More localized measurements have been in place for years. Strasbourg was the first European city to use an “intelligent traffic management system”, reducing the number of stop-and-go waves along its roads. This reduced emissions of nitrogen oxides and harmful particles from dragging vehicles by 8% and 9% respectively.

During her stay in Paris, Mayor Anne Marie Hidalgo experimented with a series of traffic control rules, including the ban on diesel vehicles manufactured before 2006 in the city on weekdays.

What is the reaction in France?

Macron’s latest move follows a long-term campaign by WWF and other groups – including a report which found that 1.8 billion euros were spent on the promotion of SUVs in France in 2019. The NGO claims that the SUV is the second biggest driver of greenhouse gas emissions during the last decade, behind planes.

Isabelle Autissier, president of WWF France, believes that gas guzzlers fill up “the advertising space to the detriment of the vehicles of tomorrow. It cannot continue. In order to slow this trend, the government must act by banning advertising for heavier vehicles and redirecting it.

The decision to include warnings in advertisements rather than banning them outright (again) was seen as a compromise.

And it’s not just the worst offenders who will come with a warning. Peugeot, Renault and other common French cars will have to comply with the advertisement. It’s similar to health warnings on food and drink advertisements around the country – which advise people to “avoid eating too much fat, sugar or salt.”

A boss of a French car manufacturer seems to take it more or less in his stride. “I take note, we will adapt,” Lionel French Keogh, CEO of Hyundai France, told Agence France-Presse.

“Zero emission transport is the future,” he said, adding that it was “a little counterproductive” for electric vehicles to have to carry the message as well.