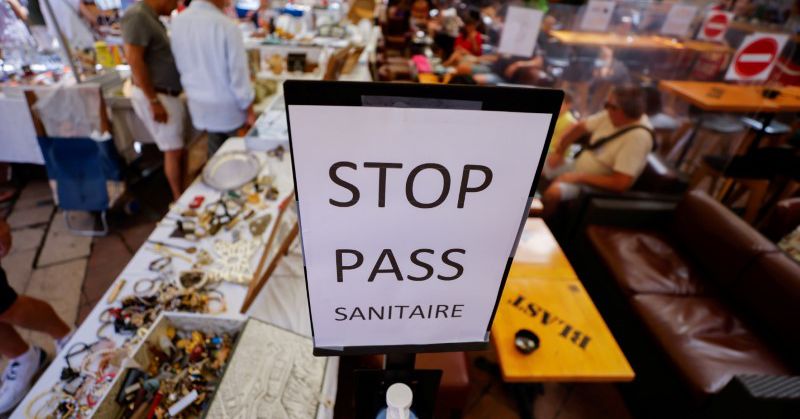 French vaccination centers vandalized during the introduction of the health passport

A coronavirus disease (COVID-19) health card poster is seen in a restaurant as France imposes stricter restrictions where proof of immunity will now be required to access most public spaces and to traveling by intercity train, to Nice, France, August 9, 2021. REUTERS / Eric Gaillard / File Photo

PARIS, Aug.11 (Reuters) – Vandals have attacked more than 20 vaccination centers and other health facilities, smearing some with Nazi-themed slogans, as the French government steps up its COVID-19 vaccination campaign .

Anger has been fueled by the introduction of a health pass showing proof of vaccination or a recent negative COVID-19 test which is now required to enter restaurants, trains and other public places.

Over the past four weekends, protesters marched against the health pass, claiming it restricted individual freedom. Read more

Since July 12, a total of 22 health facilities have been attacked and degraded, including 15 vaccination centers, five COVID-19 testing centers and a medical laboratory, an Interior Ministry official told Reuters on Wednesday.

Across the country, vaccination centers and outdoor drugstore testing facilities have been labeled with swastikas and graffiti such as “collaborator”, “Nazi” and “genocide”.

The same slogans were also seen during some protests against health passes.

Last month, in the Loire Valley town of Neuille-Pont-Pierre, Stars of David – similar to the ones Jews were forced to wear by the Nazis – were painted on the signs of vaccination centers .

“We are cleaning up these horrors, it is odious. Other centers have also been affected by these racist and cowardly attacks”, declared the mayor of Neuille-Pont-Pierre Michel Jollivet on BFM.

In Lans-en-Vercors, in south-eastern France, anti-vaccine graffiti was painted on a community hall that housed a vaccination center and fire hoses were opened, flooding the facility, a reported the local newspaper Le Dauphine.

“Destroying a vaccination center says a lot about the motivations of the perpetrators, who will be hunted down,” Health Minister Olivier Veran said in a tweet.

“There is no doubt that the vaccination center was targeted,” the mayor of Audincourt, Martial Bourquin, told L’Express.

Staff at a Toulouse vaccination center on Sunday found a note saying “One day this will all explode,” local media reported.

Home Secretary Gerald Darmanin has said the perpetrators will be severely punished, but so far no major arrests have been made.

After a slowdown in infections after France’s third lockdown this spring, the more infectious Delta variant has seen the number of new cases increase, now to more than 22,000 per day on average.