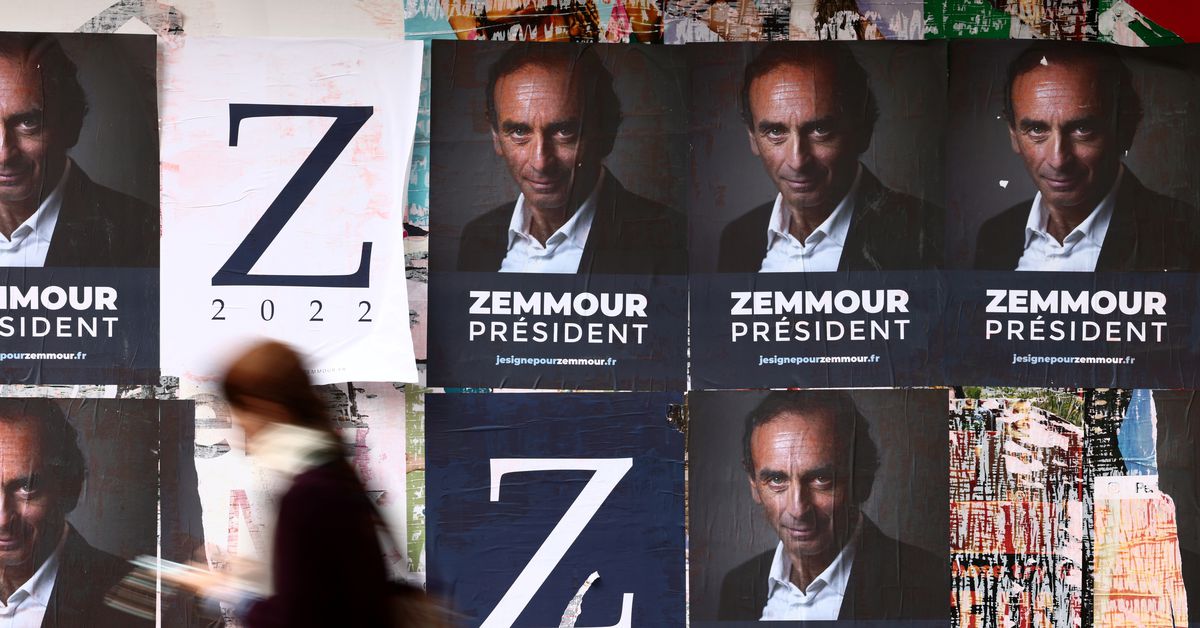 PARIS, October 14 (Reuters) – Armed with buckets of glue and brooms, Anne-Lys Falicon and a dozen others put down their glasses and went out into the night to put up posters of Eric Zemmour, the political outsider with incendiary views which is shaking up the race for the 2022 elections in France.

Falicon, a fashion student never identified with a political party, while others plastering Zemmour’s portrayal in an affluent Parisian neighborhood included former supporters of the far-right and longtime conservatives.

“He was never elected, he is not part of the political system,” said Falicon, 23. “He brings a new perspective. His life is not all political.”

A polarizing figure who has made a career in television and writing testing the limits of political correctness, Zemmour accuses the political class of allowing a constant erosion of traditional Christian values ​​and national identity in France. Read more

Born in Paris to Jewish Algerians who emigrated to mainland France in the 1950s, Zemmour stands as an example of how France has successfully assimilated its migrant population. Now, he says, waves of immigrants have been allowed to hate France and push back on its core values.

His uncompromising rhetoric – he has twice been convicted of inciting hatred – resonates with some voters and repels others.

“What a shame!” shouted a passing motorist as young activists put “Zemmour – President” posters on walls and concrete street barriers. Another motorist honked approvingly, shouting: “France for the French!”

Activists were quick to try to detoxify the fleeting comment.

“There is a difference between ‘France must remain France’ and ‘France for the French’,” said Foucaud, who, like most other Zemmour supporters, gave only his first name.

“France for the French means nothing. What matters is that people assimilate,” said Emmanuel.

Some activists said there was an “immigration problem” in France but avoided talking about Muslims in particular who were frequently the targets of Zemmour’s verbal bursts.

Zemmour, 63, has yet to officially declare his candidacy for the 2022 race but is behaving very much like the candidate.

Polls show he is contesting a place in the second round, poaching the votes of the far-right National Rally of Marine Le Pen and the conservative fringes of the dominant right. Read more

The dozen young people declared that they were part of a troop now strong of 3000 young militants of Zemmour who nickname themselves “Generation Z”. They describe themselves as radical but not extremist, supporting a man who wanted to get to the root of the evils perceived by France.

“Zemmour often talks about insecurity, it’s a big subject. He has the courage to talk about it openly, without mince words. It touches me especially as a woman … We don’t talk enough about it. insecurity in France, “said Faucon.

A man passing through the neighborhood the next morning said: “Everyone is free to have their own opinions. Fortunately, sometimes advertisements are pasted on their campaign slogans.”