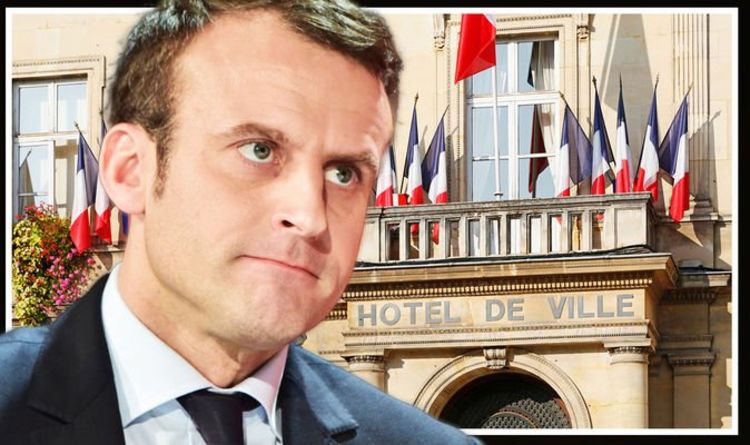 Macron news: the French president snubbed by the mayor after remarks on the vaccine | World | News

Emmanuel Macron’s famous statement, indicating his “desire to p ** ser the unvaccinated to the end”, is decidedly not unanimous. In Tarn-et-Garonne, Nils Passedat, mayor of Lavaraurette, a town of about 200 inhabitants, decided to take down the portrait of the head of state in his town hall and send it back to the prefecture, reports La Dépêche du Midi . Offended by Emmanuel Macron’s words, the mayor felt that he could no longer meet his City Council under the gaze of the presidential portrait.

In a letter addressed to the prefect of the department, the elected representative said he was wondering about “this new policy which no longer wants to be sanitary but discriminating, and the means to implement this new strategy”.

At the prefecture, he specified that the official portrait had been replaced by the Universal Declaration of the Rights of Man and of the Citizen of 1789.

The mayor added: “So maybe he reigns better like that, but we think that the role of the Head of State, of the President of the Republic, is to bring together, to reunite France. We feel he is insulting the presidential role. “

Macron’s portrait has been removed from a town hall in France (Image: Getty)

The incident was not the first time that Macron’s portrait had been removed (Image: Getty)

According to the mayor’s letter, “Since Macron’s election, our municipal council has always met under the gaze of the one who embodies the head of state.

He adds: “But today that citizens have been insulted by the very one who has the duty to serve them, we have decided to return his portrait to you.

“This portrait will be replaced by the Universal Declaration of the Rights of Man and of the Citizen of 1789 which, in its first article, affirms that all citizens are born and remain free and equal in rights.

Nils Passedat sent a copy of his letter to the mayors of the department, asking them to join in his gesture by returning to the prefecture the portrait of the person who embodies the head of state.

Bernard Pezous, president of the Association of Mayors of Tarn-et-Garonne declared: “It is a very personal political decision on his part and I am not aware of any other case. Whether or not everyone likes the terms used by Emmanuel Macron, I prefer to remain neutral. “

The presence in town hall of the portrait of the Head of State is a tradition and not an imperative obligation.

The debacle began following Mr Macron’s statement to anti-vaccines saying ‘we’re going to piss you off’.

Mr Macron said last week he wanted to irritate unvaccinated people by making their lives so complicated that they would end up getting stung.

Unvaccinated people are irresponsible and unworthy of being seen as citizens, he added.

In Paris, the demonstrators retorted by adopting its slang formulation, chanting “On va te p ** ser”.

Others carried signs saying ‘No to the vaccine pass,’ a reference to Mr Macron’s legislative pressure to require proof of vaccination to enter places such as cafes, bars and museums.

Television footage showed skirmishes between protesters and police at a site.

Protesters also gathered in the streets of Marseille, Nantes and Le Mans, among other cities.

“[Macron’s remarks] were the last straw. We are not irresponsible, ”said hospital administrator Virginie Hoguet, who avoided a mandatory vaccine order for health workers because she caught Covid-19 late last year.

So far in France, 11.9 million people have been infected with the virus and 123,000 people have died from the pandemic.

127 million doses of the vaccine have been administered to the French, with 50 million people fully vaccinated.

72 percent of the French population has been fully vaccinated.