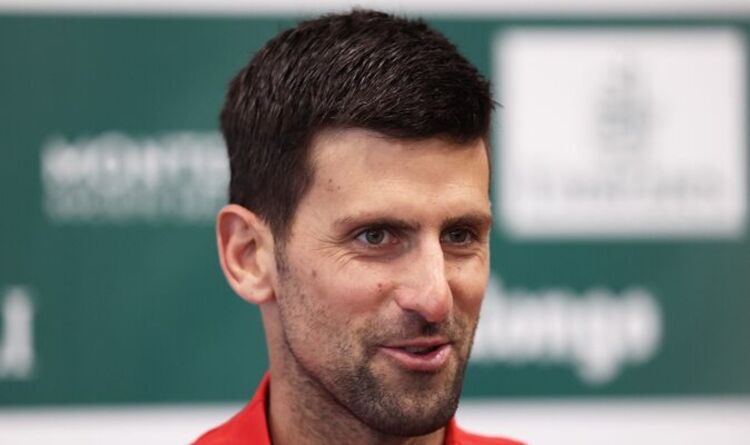 Novak Djokovic is eager to return to the court at the Monte-Carlo Masters this week, with the Serb only due to take part in his second event of the year. Djokovic has already won the tournament twice and is set to face Alejandro Davidovich Fokina in his first match on Tuesday.

The 34-year-old hopes to defend his title at Roland-Garros next month and the Monte-Carlo Masters will be ideal preparation for Djokovic, with both tournaments taking place on clay. And speaking ahead of the Masters, Djokovic issued a warning to rivals like Rafael Nadal, saying he is “motivated” to “challenge the best players in the world for the biggest titles”.

Speaking at the pre-tournament press conference, Djokovic said: “I always feel motivated to be on the Tour and compete with young guys and try to challenge the best players in the world for the biggest titles. I am very happy to be here and Monaco has been home for more than ten years.

“I was looking forward to the time when I will be competing again, so this is the best place for me to start. The clay court is the surface I grew up on in Serbia and I played from many years only on this surface in fact.

In a series of videos on Instagram showcasing a preview of the clay-court season, Mouratoglou is full of praise for Djokovic. “If you think of Roland Garros now, you might think it’s the most open in the last 10 to 15 years,” he said.

“If Novak is able to win a lot between the start of the season on clay and Roland Garros, then it won’t be as open. Because Novak when he’s at his peak, even on clay, I think he’s the best player in I know it’s weird to say that when you see the number of Roland Garros that Rafa has won. But if you look at the numbers, Novak has beaten Rafa many times on clay.”

Celltrion launches in Canada and wins tender in Brazil