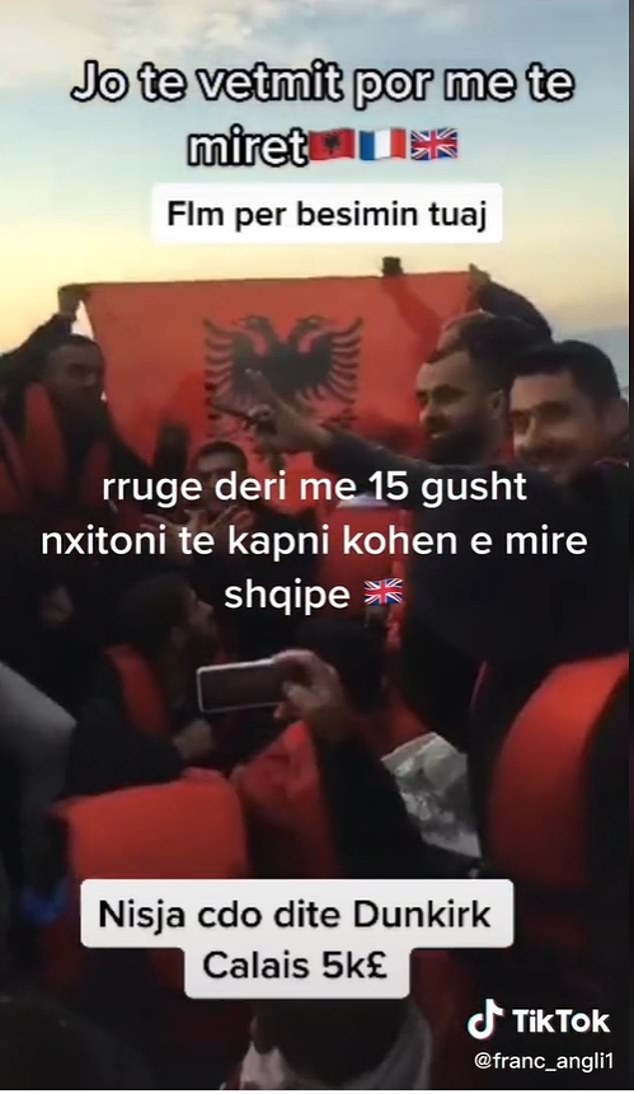 Leaked figures showed Albanians now account for four in ten arrivals from northern France, with 1,075 arriving in the UK on dinghies and small boats in the six weeks to July 12.

They made up 37.5% of all migrants smuggled into the UK in small craft by gangs during the period – eclipsing all other nationalities including Afghans, Iranians, Iraqis and Syrians.

Advertisements on social media are now offering ‘cheap’ prices for crossings as low as £3,500 – up from £5,000, reports the Telegraph.

The ‘summer sales’ are said to contribute to an increase in sailings.

And now several accounts have been discovered on TikTok selling Channel crossings and promising ‘safe passage’ – as well as advice on using the asylum system.

One of these smugglers told an undercover Sun reporter: “The French won’t stop you. Rather, they will safely escort you until you reach the UK sea border.

They were then told to contact a lawyer when they arrived in the UK who would help them cook up a ‘good story’.

One of the TikTok accounts posted a video offering safe passage from Calais in northern France for £5,000

Three accounts were found advertising the crossings, one bragging about how the French let migrants through

The smuggler added: ‘I can give you the number of a lawyer I used for my relatives. They managed to obtain documents (residence permit) for half of the Albanians in London.

He continued: “Three months ago a boy was held in custody for a month and then released by his lawyer.

“Everyone else I spoke to after arriving was sent to hotels and then disappeared. They went to their relatives.

The man was speaking from the TikTok account @franc_gomone_angli1.

It comes as another 150 migrants, including young children and a baby, were picked up from Dover after being rescued from the English Channel on Monday – amid calls from MPs to relaunch the Rwanda plan as soon as possible.

Tory backbenchers have called on the next prime minister to act urgently.

Natalie Elphicke, Conservative MP for Dover, said: “It is clear that many Albanians coming to the UK in small boats are not fleeing war or persecution – they are economic migrants.”

“This is flagrant criminality and underscores the urgency of pursuing with Rwanda and similar projects.”

Tom Hunt, the Tory MP for Ipswich, said the “really eye-opening” figures “underline why it is so important that the government go ahead and present the Rwandan agenda”, adding: “We need to stop this farce”.

“Legislation to make the Rwandan project a reality should be high on the list when Parliament returns after the summer recess.”

Home Secretary Priti Patel said: ‘No one should question this government’s determination to break the gang business model.

The reporter contacted three TikTok pages under the guise of a migrant seeking access to the UK.

A smuggler called himself Ghent and claimed to be the “god” of human trafficking.

He offered transport to the UK via a luxury yacht for £15,000 per person, while a second courier from Birmingham sold seats in a dinghy for £8,000 for two.

The @franc_gomone_angli1, which posted videos of the attempted crossings, also said that Rwanda’s migration policy has been “canceled” and the government will “send you to a hotel”.

A statement from TikTok said: “This content has no place on TikTok. We do not allow content that promotes human trafficking.

“We are working closely with UK law enforcement and industry partners to seek out and remove content of this nature, and are participating in the Joint Action Plan with the National Crime Agency to help tackle the online immigration crime.”

“We are considering reforming the system we use to identify victims of modern slavery, so that we can support the real victims while ensuring the system is not misused.”

Netflix ads are coming, here’s how the new subscription tier will work