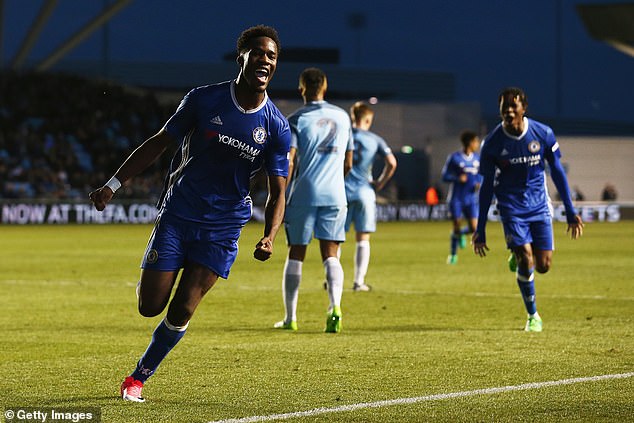 Qatar 2022: Ike Ugbo ready to “shock” with Canada at the World Cup

When former Chelsea youngster Ike Ugbo was a kid growing up in Canada, it was hard to find anything to do with their national team and major tournaments.

“Football wasn’t that big in Canada back then,” recalls striker Ugbo, now at French Ligue 1 club Troyes. “And there wasn’t really a discussion about Canada’s players.

Canada’s profile and notoriety has changed dramatically now with Ugbo forming part of the team led by England coach John Herdman and including Bayern Munich’s Alphonso Davies and Lille’s Jonathan David who have put the country back on the map of the international soccer.

In March, Canada made history by qualifying for this year’s World Cup, its first since 1986, and Ugbo, 23, said: “When I came back and we qualified, and even before qualifying, you could see little things like newspaper ads, us being invited to events like basketball games.

“It just shows that the country is really behind the team and supporting what we are doing.”

Ugbo, a former England youngster who briefly declared for Nigeria before deciding his international future was with Canada, added: “Once we qualified against Jamaica, you could see the tears in our eyes. players. People were on the ground crying.

“I could see it meant so much to everyone and they put in so much work before I even got to this point. I made the choice to change course, join the group and help the team do their best in the World Cup.

“The closer it gets the more it starts to hit me, I’m actually going to a World Cup.”

Born in London, Ugbo moved to Canada with his family aged three before returning to England aged nine.

While in North America and started playing football, Ugbo did so mainly for fun.

It was after joining Chelsea academy after being spotted playing for Tooting & Mitcham that he started to really grasp the magnitude of what he was doing and the opportunities that lay ahead.

‘View Players [around the training ground] and being a ball boy for games as he got older,” he recalled.

“At 12 you become a ball boy, see the stadium and realize it’s a big deal and what you’re trying to aim for.

“I was ballboy for the Chelsea v Arsenal 5-3 game when Robin Van Persie scored a hat-trick and Chelsea v Barcelona when Didier Drogba scored. It was the best game I’ve seen, I think.

“It’s been a roller coaster ride and it’s not always a straight line to your destination,” Ugbo said.

“Everyone’s path is different and you can see that, especially the players I played with, some of them, they had a great run in the Chelsea first team.

“But you came to Chelsea on your own. You have to focus on what you have to do.

“Obviously it would have been nice to stay at Chelsea, but sometimes you go through certain things for certain reasons in life.

“My case makes me a stronger person, a better footballer. I have to learn this way, but it’s going in the right direction, that’s what worries me the most.

Looking back now, he can reflect on some valuable and career-defining lessons and his time at Chelsea laying the groundwork for everything he is currently going through, with his career heading on an upward trajectory for club and country. .

A prolific goalscorer and winner of several trophies at youth level, Ugbo saw what it felt like ‘like a boy’ playing men’s football in the league and league 1 when he saw clips of himself during of his first loans away from the Chelsea ‘bubble’. at Barnsley, MK Dons and Scunthorpe.

“After my third loan, second year on loan when I was at Scunthorpe, I returned to Chelsea mid-season in January and that’s when I had time to think about loans “, did he declare.

“Have appropriate conversations about why I don’t score the same as when I was at Chelsea, why I don’t do the same, that sort of thing.”

“After that I had four months, five months to prepare myself to kind of rebuild my career because the direction it was going then was not the way it was intended.

“It was going down the leagues and I had to start over and leave with a new mindset of ‘I’m just going to rebuild my name. “”

Open-minded Ugbo sought help from a psychologist, admitting that “going from such high confidence, winning cups to square one in two months really hit me”, to understand “why the results don’t come anymore”.

It was also around this time that he started working out and adding the routine of extras – “the little things you’re not asked to do” – to the training ground and in the gym that serves him. always now and has become “second nature”. ‘.

Rather than take a chance on another Football League loan, Ugbo went abroad for a fresh start with a fresh approach and thrived.

His last two loan spells while still a Chelsea player were prolific at Dutch side Roda and Cercle Bruge in Belgium. He scored 30 goals in 63 games.

Ugbo then joined Genk on a permanent basis at the start of last season before a loan spell at Troyes where he scored five times in 11 starts, his last three goals boosting confidence against Monaco, Lille and Paris Saint-Germain.

“I believe I can play at the highest level, but when it happens, scoring against the big teams is a nice feeling,” he said.

“Now just nurturing it and running it regularly to achieve what I want in my career.”

Having adapted impressively to life abroad and all encompassing among the many things Ugbo has discovered is a world of football beyond England.

“Before, it felt like Prem was the goal,” he said. “Now that’s still the goal, but I feel like it’s working overseas.

“I wouldn’t mind staying and finishing my career abroad. I just don’t wanna leave [back to England] for the pleasure of going there, I want to go to a club that wants me and I can play.

“Now every season I start the same way I started at Roda – I’m just going to show what I can do.” It doesn’t matter the environment as long as I do my job properly, I think my performance will show that.

How at home Ugbo feels abroad was underlined again this summer when opportunities to return to England presented themselves, but he instead preferred to join Troyes on a permanent basis.

And with the huge opportunity for Canada looming in Qatar, continuity was essential.

“That’s why I made this decision,” he confirmed.

“It was difficult to say no to England but it was, I think, the right decision. When I came here [to Troyes] I was really starting to enjoy football again. It was a top five league, which I always wanted, we did well towards the end of the season and I was performing well.

“I need to have a rhythm of play and to score goals to participate in the World Cup, to be very confident and to do what I do best.

“It’s very important for Canada after so many years to finally get back to a World Cup, that’s why I had to look where I am to be able to go.

“Personally, I think we’re going to do well and shock a lot of teams with the qualities we have.

“Even though we have a young squad, we still have experience playing in the big European leagues.

“Once we all mold this together, I think we’ll surprise a lot of people and what they expect from Canada.”

US dollar retreats after weak US data