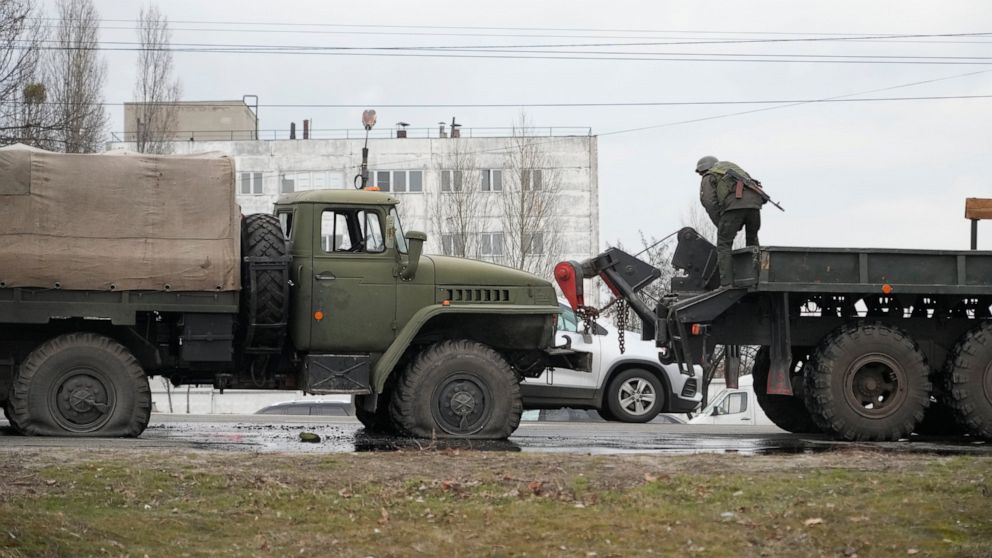 LONDON — Ukraine’s invasion prompted punitive action across the sporting world on Friday when Russia were stripped of the Champions League final, with UEFA replacing St Petersburg with Paris as hosts and Formula 1 dropping out of this season’s Russian Grand Prix in Sochi.

The International Olympic Committee has also urged sports federations to move their events out of Russia or Belarus, which Moscow uses as a staging ground for its troops moving into Ukraine from the north.

A backlash against the adoption of Russian state-owned companies as sponsors in sport has seen Manchester United abandon the Aeroflot trade deal, with the Premier League club citing ‘events in Ukraine’ after the airline was banned in Britain as part of the sanctions against the regime of President Vladimir Putin. .

This follows talks led by UEFA President Aleksander Ceferin which have involved the European Commission and French President Emmanuel Macron in recent days after concerns were raised about the status of Russia retaining such a prestigious event after its aggression against another European country.

Alexander Dyukov, a Russian member of the UEFA executive committee, complained that the decision was made for “political reasons”. Dyukov also objected to UEFA ordering Russian clubs and national teams to play at neutral venues until further notice – a decision also imposed on Ukrainian teams.

The move comes as Russian bombs and troops pounded Ukraine in the first full day of the invasion, and world leaders on Friday began to fine-tune a response meant to punish the Russian economy and its leaders, including Putin’s inner circle.

The IOC had already condemned Russia for violating the Olympic Truce, a few days after the end of the Winter Games in Beijing and before the Paralympic Games.

Russia’s name, flag and anthem are already barred from the Paralympic Games from March 4-13 in Beijing due to previous doping disputes. His team is to compete under the name RPC, short for Russian Paralympic Committee.

Now the IOC is asking events not subject to WADA anti-doping sanctions to no longer display the Russian or Belarusian national flags or play their anthems.

Motorsport continued in Russia after it was not bound by the WADA’s decision banning Russia from hosting international sporting events until December.

The F1 race was only scheduled for September in the Black Sea resort of Sochi, but the management of the motorsports series decided it would be “impossible” to stage the Grand Prix after discussions with the teams and the governing body of the FIA. The American team Haas also dropped sponsorship from Russian company Uralkali during pre-season testing in Barcelona. Nikita Mazepin de Haas is the only Russian driver on the F1 grid this season.

“We watch the developments in Ukraine with sadness and shock and hope for a quick and peaceful resolution to the current situation,” F1 said in a statement.

There is the unresolved question of Russia still to host Poland in the semi-finals of the World Cup qualifiers in Moscow. Poland wants the game out of Russia, but FIFA has yet to decide.

UEFA were more decisive in organizing the Champions League final, which was hailed by the British government.

“Russia must not be allowed to exploit sporting and cultural events on the world stage to legitimize its unprovoked, premeditated and unnecessary attack on a sovereign democratic state,” said UK Culture Secretary Nadine Dorries, head of the sports record.

UEFA has two weeks before the next round of Champions League games to fix the issue of Gazprom adverts flashing around stadium pitches. Furthering the company’s close ties with UEFA, Dyukov is CEO of a Gazprom subsidiary and sits on European football’s highest decision-making body.

The Gazprom logo has already been removed this week from the jerseys of German club Schalke, but it remains a sponsor.

Outside of football, the International Ski Federation has announced that Russia will no longer stage its World Cup events this winter. The decision came after a far-fetched attempt to hold ski cross races Friday in the Urals resort Sunny Valley a day after Russia began an invasion of Ukraine.

Only a handful of Russians took the start and dozens of riders from all other countries did not participate. The FIS cited “the safety of all participants and maintaining the integrity of the World Cup” for canceling five events scheduled for next month. Replacement locations are being sought.

Follow AP’s coverage of the Ukraine crisis at https://apnews.com/hub/russia-ukraine

The most beautiful places to visit in France