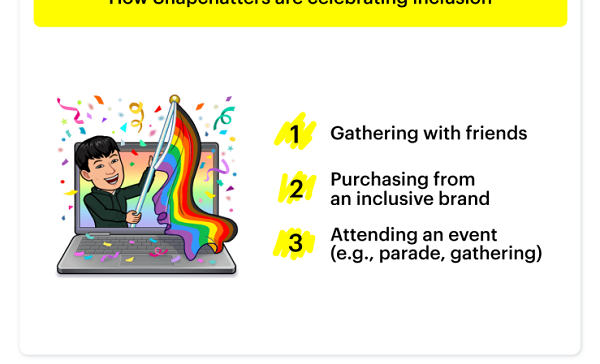 Snapchat has released new information on how its users view inclusion and diversity, as well as how brands are supporting social movements in different ways.

To better understand this, Snapchat conducted a survey of over 5,000 users of in the US, Canada, UK, Germany, France, Norway, Netherlands, Sweden and Australia, offering a wide range of perspectives on how its audience seeks to interact around problems and social movements.

And the results are probably what you’d expect, given the app’s youthful bias – Snapchat users are increasingly inclusive and are more open to brands aligning with their worldview on key issues. .

I mean, self-attribution might be different than the real thing, because I guess most people would consider themselves to be relatively nice and inclusive. But even so, Snap’s new ideas reinforce that ethos and the importance of inclusion in their approach.

“Snapchatters encompass all aspects of who they are, like the causes they care about, the music they love, and the content they create and share online. 8 out of 10 say “It’s important to me to be true to myself”, and Pride Month is a time to celebrate their freedom to do so.”

Now I had to double check this several times to make sure I wasn’t having a problem in the Matrix, but Pride Month was in June and the new survey data was released today. I don’t know why there’s such a strong focus on Pride Month given the timing, but the results are relevant regardless and might help with your Snap planning.

Which may well be important, as the data also shows that almost half of Snapchatters agree that all brands should reflect representation and inclusion.

“More than half of Snapchatters do research to find out if a brand cares about inclusion. In addition to checking if a brand has diverse and inclusive content, nearly 1 in 3 Snapchatters will read the mission statement and Similarly, many Snapchatters will look at brand leadership to ensure brand values ​​are represented at an organizational level.”

As has been highlighted in various Gen Z surveys and studies, the younger generation is taking a much more socially responsible approach to the brands they deal with, and it’s important that marketers recognize this in their Snap marketing approach.

Data also shows that 64% of Snapchatters are interested in supporting brands that celebrate inclusion and diversity, while 35% said they’re more likely to buy products and services from brands they love. consider as inclusive.

There is also this:

“More than a quarter of Snapchatters said they would take action on a social issue, including doing additional research, donating or attending an event if invited by a brand.”

So it’s not only the brand’s benefit to connect to relevant social causes and align with your target market’s perspective, but it can also help encourage more activity and adoption. same causes as a result of your promotions.

These are some interesting notes, which once again underline the brand value of being more outspoken about the causes and movements you align with, and promoting them from the start, instead of keeping it for you lest you fire some people.

Young consumers want to know they support companies that support the same things they do, which can also help broaden awareness, maximize inclusion, and shift perspectives.

Some important notes – you can read Snap’s full study here.