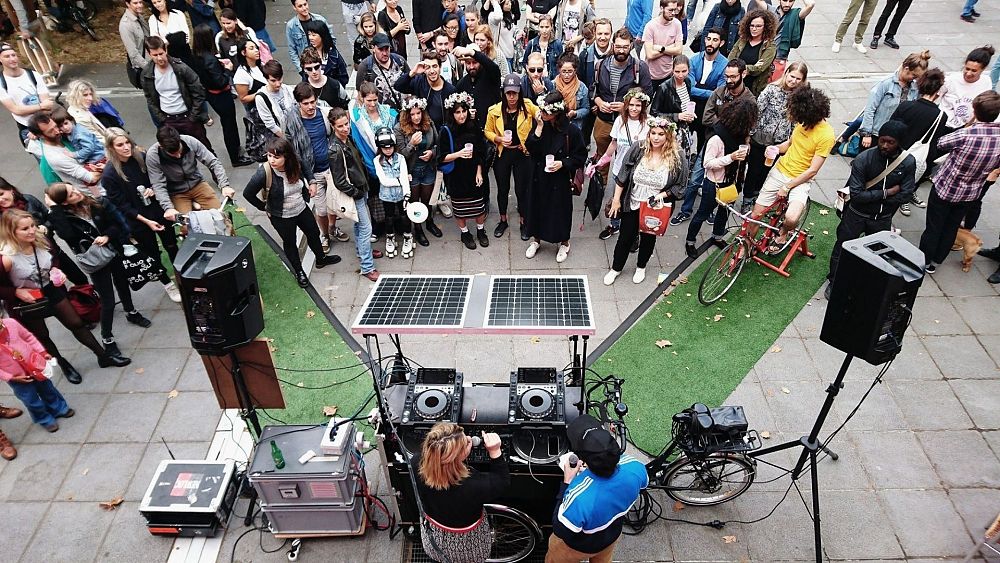 A French company called SolarSoundSystem is celebrating its 21st year of hosting solar and cycling parties in Europe.

Party-goers have attended events since 1999, dancing to music powered entirely by renewable energy.

the solar powered sound systems started in Lausanne, Switzerland, but has now grown in France, with facilities in Paris, Marseille and Biarritz. As the movement has grown, parties are now held around the world in Berlin, the Basque Country in Spain, Tel Aviv and even Hong Kong.

Anxious to widely disseminate his ecological message, the founder CÃ©dric Carles affirms “that it is necessary to occur in the public space in order to increase the level of general knowledge and to capture a public not concerned by climate change”.

How do solar and bicycle raves work?

Core Team Member Rubens Ben can throw a party virtually anywhere, installing sound systems at parks, festivals or street parties. The principle is simple, during the day the batteries are charged by solar energy. These are attached to generators which allow the speakers to operate and also power the DJ decks.

Impressively, the sound quality is so high that it can accommodate up to 500 people.

In terms of music duration, the team explains that even with partial sun / cloud, the machines can run for 5 hours without bikes and 6-8 hours with bikes. With lots of sun in the sky, the party can go on forever until nightfall.

Then at night, the ravers are encouraged to take turns giving power to the pedals, cycling to keep the music going.

To mark the 20th anniversary of the holidays last year, the eco-friendly sound system released a vinyl compilation electronic artists who have performed on their systems over the years.

The chosen tracks pay homage to the eight international artists who have supported SolarSoundSystem in the past, such as Jay Ka and Gregorythm. For each copy sold, a tree was planted in Peru via a reforestation charity A planted tree.

France will continue to issue visas to new Vietnamese passport holders, but they…