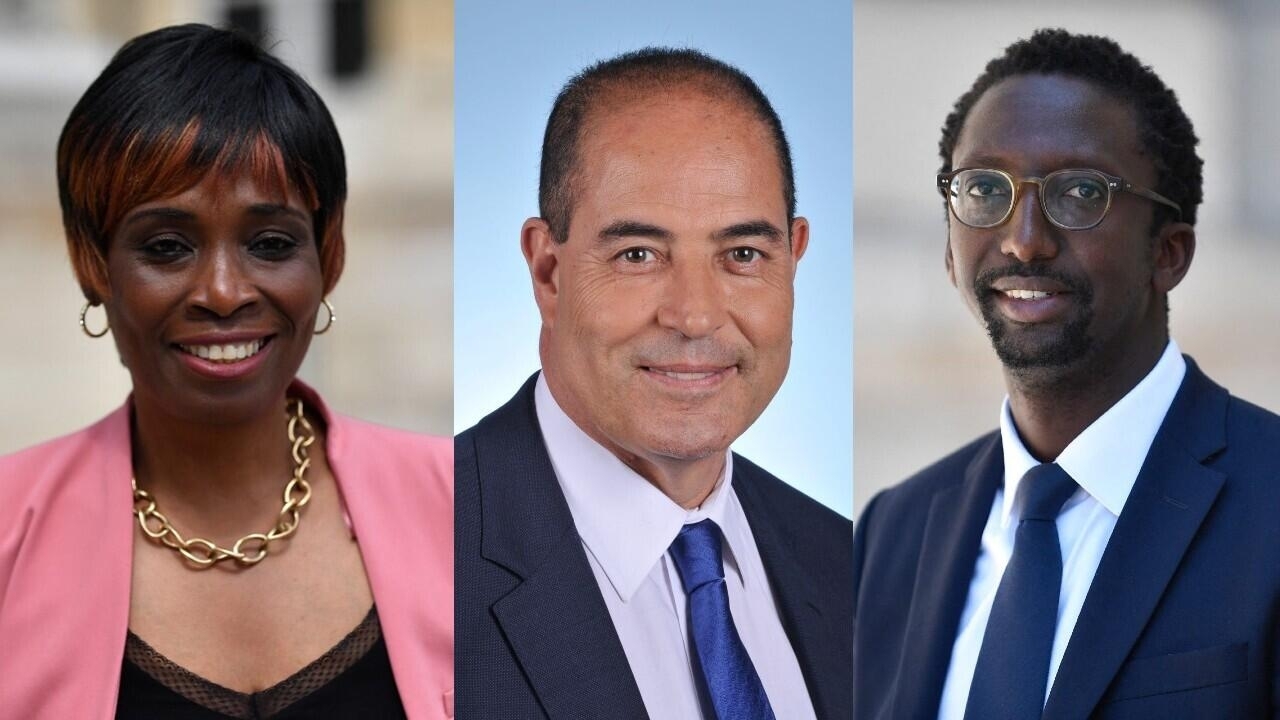 The National Assembly gradually reflects “the diversity of the French street”

French voters elected 32 deputies of minority origin to the new National Assembly, according to a count by FRANCE 24. While it marks a slight drop in the representation of diversity compared to the record level of the 2017 polls, it nevertheless marks progress in France’s diversity record.

The 2022 French legislative elections have seen a slight decrease in diversity in the new National Assembly after a historic high in 2017 polls, which swept a record number of ethnically diverse lawmakers into the lower house of parliament. .

According to the tally by FRANCE 24, at least 32 of the 550 deputies, or 5.8% of the National Assembly elected in the June vote, are from diverse ethnic origins, compared to 35 legislators elected five years ago. These figures exclude French overseas territories.

As the collection of demographic data based on ethnicity is prohibited in France, there are no official statistics on minorities. The FRANCE 24 figures are based on tabulations adopted five years ago: We have identified elected representatives of whom at least one parent is from either overseas France or from a non-European country.

For MPs from French overseas territories, we have only retained those elected in metropolitan constituencies. So, for example, Maud Petit – a centrist MoDem MP from the Val-de-Marne constituency near Paris, originally from Martinique – is included in our tally.

Following the method adopted five years ago, the descendants of black feet – or people of French or European ancestry born in colonial Algeria – are not included.

Five years after French voters elected a record number of minority lawmakers, the 2022 race may have seen a slight drop. But it is a “stagnation” which “hides progress”, according to Patrick Lozès, president and founder of the Representative Council of Black Associations of France (CRAN), an umbrella association of associations fighting against discrimination.

“In 2017, it was a windfall,” said Lozès, noting that newly elected President Emmanuel Macron’s La République en Marche (LREM) party did not expect to have so many elected and that the candidacies were distributed hastily. “In fact, there’s been a huge drop in the ranks of their MPs this year. Things seem to be stabilizing,” he added, referring to the ruling party’s failure to secure an outright majority in the election. ‘National Assembly.

Lozès, who was a candidate in the 2002 legislative elections, acknowledges the progress made over the past 20 years, when he was one of the few candidates from diverse backgrounds to be nominated by a major French party. “Since that time things have totally evolved,” he noted.

As the founder of a group working for greater diversity, Lozès regrets the banning of ethnic statistics in France. Far from condemning the country’s record on minority representation, as some believe, Lozès argues that diversity-specific statistics “would make it possible to measure progress in this area. We could have quantified the progress of 2017 compared to 2012, when the number of elected representatives from diversity tripled. The National Assembly gradually reflects the diversity of the French street,” he noted.

According to a 2015 study by the National Institute of Statistics and Economic Studies (INSEE), 7.3 million people, or 11% of the French population, had at least one immigrant parent.

Analyzing party-wide figures, this year Jean-Luc Mélenchon’s France insoumise (La France Insoumise or LFI party) has the highest number of minority MPs, accounting for 14.6% – or 11 of the 77 MPs LFI – in the new National Assembly.

Among the best-known LFI lawmakers, all elected in the Paris region, is Danièle Obono, a Franco-Gabonese parliamentarian who retains the seat she won in 2017.

Others include Sophia Chikirou, communications director of Algerian-born Mélenchon, Nadège Abomangoli, born in Congo Brazzaville, and Rachel Keke, who made headlines during the race for the 2022 legislative elections.

Born in Ivory Coast, Keke arrived in France aged 26 in 2000. She was one of around 20 chambermaids who won a grueling union fight against a Paris hotel.

Raquel Garrido, a LFI powerhouse who arrived in France aged 14 after her parents fled the Chilean dictatorship in the 1970s, was also elected to the National Assembly, alongside Rodrigo Arenas, another lawmaker from Chilean origin.

“Some parties are much more attentive to the question of diversity, starting with LFI. The movement is very interested in working-class neighborhoods and has made itself the bearer of their demands”, estimates Sébastien Michon, sociologist at the National Center of France . for Scientific Research (CNRS).

On the other hand, Macron’s ruling party has seen a decline in diversity numbers this year.

Some emblematic LREM candidates in the 2017 race, such as Mounir Mahjoubi, former deputy digital minister and symbol of diversity five years ago, chose not to run for the 2022 legislative elections.

Others, like Laetitia Avia, who ran in the 8th arrondissement of Paris, were beaten this year.

From zero diversity to “can do better”

On the right of the political spectrum, the center-right Les Républicains (LR) and the National Rally (RN or National Front) of Marine Le Pen displayed little diversity.

While LR – the party of former French President Nicolas Sarkozy – fielded candidates from diverse backgrounds, none of their MPs (62 for LR, 89 for RN) met FRANCE 24’s tabulation criteria.

In the case of Le Pen’s National Front, however, the finding is not surprising, since immigration control is one of the pillars of the party’s program.

Between these good and bad diversity scores, a number of parties can be placed on the “can do better” list. These include the once powerful French Socialist Party, the Greens, the centrist MoDem, the Communist Party and the Union of Democrats and Independents (UDI).

In the racially diverse Seine-Saint-Denis neighborhood north of Paris, Soumya Bourouaha, the daughter of Algerian immigrant parents, won a seat for the Communist Party, saving the party a repeat of its zero diversity score of 2017.

Risk of “ethnicization” of candidates

While the formation of an alliance of France’s largest left-wing parties has given a boost to the 2022 legislative campaign, the NUPES (New Union Popular Ecological and Social) bloc has not been spared a wave of diversity ahead of the June elections.

In early June, when the left-wing alliance posted a photo of its candidates in Seine-Saint-Denis, one of France’s most diverse neighborhoods, it drew sarcastic criticism from comedians and men competing policies. “When I saw the list of the far left (sic) in Seine-Saint-Denis, I thought we were in the Vosges!” Said comedian Yassine Belattar, referring to the region of the eastern Vosges with a white majority.

“The controversy erupted because of the choice to place career politicians rather than local activists in ultra-pro-NUPES constituencies,” explains Michon. This is due to the very structure of parties: party cadres who have political careers claim places where they can be elected. Now, among them, there is a certain homogeneity: many white men from the upper classes. There is a friction between factionalism and political branding.

“Our goal was not to target only NUPES. We went to the left because they are parties that embrace diversity, meritocracy, ecology and, as a non-partisan association, we felt it was important to highlight this shortcoming,” said Audrey, Executive Director of All Elect. Fortassin, adding that the other parties are not immune to criticism for their lack of representativeness.

“Today’s citizens think it’s important to have diversity among their representatives to defend their voice. However, the harsh reality is that it is difficult for novices to get party nominations,” Fortassin explained. “There is of course a desire to do political marketing. highlighting a Rachel Keke. However, it must be said that without media coverage, it is very difficult for them to be elected.”

Lozès agrees with this observation, but warns of another danger. “There is also a risk of ethnicization of minority deputies, who can only be elected in ‘pockets of diversity’ such as Seine-Saint-Denis or the constituencies of French people living abroad,” he said. he warned. “Parties must pass the test to field diversity candidates everywhere. Voters vote first and foremost for the party.”

Nevertheless Lozès is optimistic about the representation of diversity in the new National Assembly, noting that “beyond the elected officials, we must also salute the unprecedented number of candidates who presented themselves in these elections”.

A crucial next step, he says, is to improve the situation. “Ideally, people from diverse backgrounds should be included on party nominating committees,” he noted. “It is there, in these opaque places where decisions are made without transparency, that everything is played out.

This article has been translated from the original in French.

Storm warning as 12 French departments are placed on orange alert