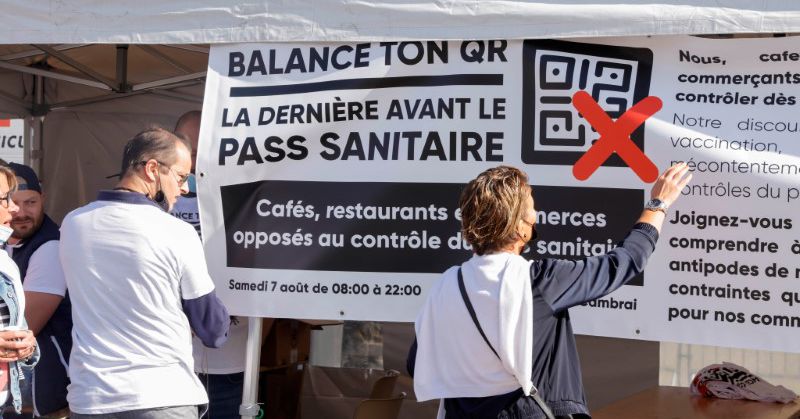 PARIS, Aug. 7 (Reuters) – Protesters marched through cities across France on Saturday for a fourth straight weekend of protests, denouncing what they see as oppressive rules forcing health workers to be vaccinated against COVID-19 and citizens to have a health pass for many daily Activities.

Protesters also gathered in the streets of Paris, Nice, Montpellier and other cities, holding up signs saying “No to dictatorship” and chanting “Macron, we don’t want your health card”.

The protests have united a disparate group against President Emmanuel Macron’s legislation, which aims to help contain a fourth wave of COVID-19 infections spreading across France and protect the country’s economic recovery.

Among the demonstrators are far-left anarchists and far-right activists, vestiges of the anti-government movement of “yellow vests” which shook Macron’s leadership in 2018-2019, but also other anti-vaccine citizens or considering the health pass as discriminatory.

Vaccination rates have jumped after Macron unveiled his health card plans last month. Two-thirds of French people have now received a dose and 55% are fully vaccinated.

From Monday, people will have to present a health passport to eat in a restaurant, access non-urgent care in a hospital or travel on an intercity train. They are already needed to access swimming pools, museums and nightclubs.

Health workers have until September 15 to get vaccinated or face suspension.

“I’d rather not be paid than be forced to get the vaccine,” hospital psychiatrist Diane Hekking told Reuters as she demonstrated in Paris.

Similar health passes – which show proof of vaccination or a recent negative test – have been introduced in other European countries, but France’s laissez-passer and its mandatory vaccine prescription for health workers are perhaps the most ambitious.

Protesters in France accuse Macron of violating their freedoms and treating citizens unequally. The president asserts that freedoms come with responsibilities that include protecting the health of others.

Data from the Ministry of Health showed that nine out of 10 COVID patients admitted to intensive care at the end of July had not been vaccinated. A majority of French people support the health pass, polls show.

France’s highest constitutional authority ruled on Thursday that the legislation complied with the founding charter of the republic. Read more .

In the northern town of Cambrai, almost all restaurants and cafes have closed their doors to protest against the health passport requirements.

“We are not against the vaccine. We are against having to control our customers,” said bar manager Laurent Zannier.

In Poland, thousands marched to protest COVID-19 restrictions in the southern city of Katowice as the country’s government debated whether to impose restrictions on unvaccinated people.

Some carried signs saying “Enough coronapsychosis”, but no major incidents were recorded.

Poles are divided on the issue with several surveys showing support for restrictions on unvaccinated people between 43 and 54%, depending on the severity of the restrictions.