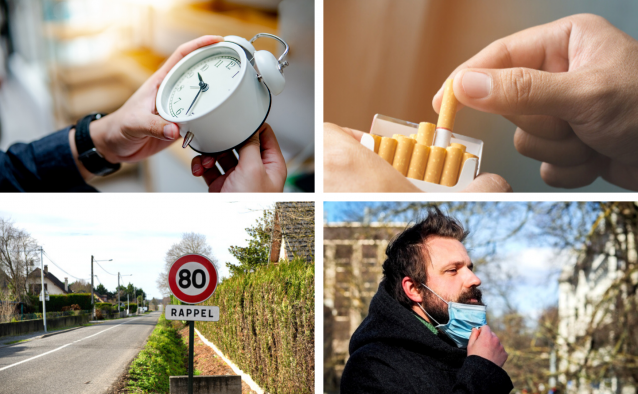 What changes for residents in March?

Each new month brings a series of shifts in France. We recap some dates you need to know for March 2022.

The end of masks and the vaccine pass?

This week brought a relaxation of mask-wearing rules in places where vaccine passes are required, including restaurants, movie theaters and museums.

However, masks must always be worn on all public transport and in spaces where you do not need to show a pass, such as shops and workplaces.

Health Minister Olivier Véran also told RTL: “We believe that by mid-March, hospital and epidemic conditions will allow us to remove the masks. [in all] inside [spaces] and to get rid of all or part of the vaccination pass.

Read more: France is on the right track to relax the rules for administering vaccines within a few weeks

The clocks are ticking

On Sunday March 27, at 02:00, it will become 03:00. This means everyone will lose an hour of sleep, but there will be more daylight in the evenings as spring and summer approaches.

Lyon city center will reduce its speed limit to 30 km/h from March 30, in a bid to improve road safety and reduce pollution. The larger routes outside the center will keep their speed limit at 50 km/h.

VTCs arrive in the Pyrénées-Atlantiques in March, after having already arrived in Creuse and Saône-et-Loire in February.

Read more: Are there any clues to identify private speed cameras in France?

Read more: Private radars of France: Where are they, who drives them?

Last days to register to vote

If you are eligible to vote in France, you have until March 2 to register on the online electoral list, or until March 4 if you do so at town hall or by letter.

Labeling of the origin of meat in restaurants

From March 1, 2022, all meat served in restaurants will have to carry labels indicating its origin. This will apply to all out-of-home dining spaces, including restaurants, school and company canteens, and in hospitals.

This measure previously only applied to beef, but now applies to pork, poultry, lamb and mutton. The aim is to support French farmers and improve the quality of meat in public eating places.

From March 1, advertisements for new cars must display the vehicle’s CO2 classification, and must contain a message suggesting environmentally friendly alternatives to passenger cars.

Advertisements on all media (TV, radio, written press, internet, etc.), must include at least one of the following statements: “For short journeys, favor walking or cycling”, “Think about carpooling”, “Daily life, take public transport”.

Brands have three months to come into compliance, with sanctions to be applied from June 1.

Rise in the price of cigarette packs

From March 1, some cigarette pack prices are expected to increase. For example, packets of Maya Green Spirit will increase by 10 cents, from €9.70 to €9.80.

The €100 inflation bonus for households earning less than €2,000 net per month will continue to be rolled out, with pensioners being the last on the list to receive it.

Most retirees will have received the money in their bank account by the end of February, but some beneficiaries will have to wait a bit longer and can expect to receive it in March.

The exceptional rules for the use of restaurant vouchers (restaurant tickets) have been extended from February 28 to June 30.

According to these rules, the daily use limit is €38 and vouchers can still be used on weekends. Previously, the limit was €19 and weekends were not allowed.

If you have holiday vouchers that expired on December 31, 2021, you now have until March 31 to exchange them in order to extend their validity. You can exchange paper vouchers, digital vouchers and sports vouchers for new ones that will be valid for the next two years.

Until March 31, employers can pay the Macron bonus, introduced in 2018 to respond to the yellow vests purchasing power requirements.

This tax-exempt premium can reach €2,000 per year for employees whose gross income does not exceed €4,809.45 per month. In 2021, nearly four million employees received an average bonus of €506.

End of the ‘winter truce’ (winter break) on evictions

The winter truce of the winter truce, which prohibits the eviction of tenants, in place since November 1, 2021, will end on March 31.

However, this does not apply to illegal squatters, or evictions from the marital home ordered by a judge in cases of domestic violence or divorce proceedings. In these cases, the eviction will take place immediately (or according to the judge’s mandate), regardless of the winter break.

Read more: A woman rents a French second home for a few weeks, the tenant refuses to go there

On March 1, a new public maintenance service (alimony) will be put in place by the government to facilitate payments.

The service will act as an intermediary between the two divorced parents, allowing the National Family Allowance Fund (Caf) and the Mutualité sociale agricole (MSA) to deduct the sum directly from the ex-spouse’s account for alimony. decided by a judge.

For the moment, only divorces with children are concerned. The system will be extended to all other types of separation and divorce on January 1, 2023. In France, 30% of maintenance payments are not paid or are paid irregularly.

Last month to register for Parcoursup

Registrations for the university selection platform have been open since January 20 and close on March 29. Candidates will then have until April 7 to validate their application. The first phase of admission will begin on June 2.

From March 1, “The Youth Engagement Contract” will allow young people without training or employment, aged under 26, to benefit from training, financial support and easier access to use.

It replaces the ‘Guarantee Jeune’ and can last from 6 to 12 months. It is supported by the local Missions Locales or the employment agency Pôle Emploi.

Ten changes and updates for residents of France in February 2022

Tax, housing, cars: 19 changes in France for residents in January 2022

16 changes for residents in March