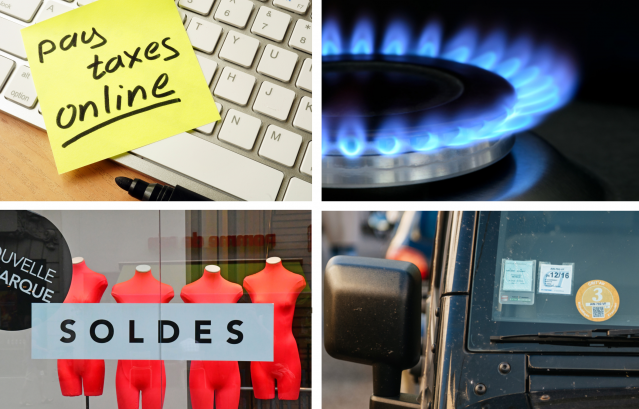 A new month always brings new conditions for household budgets and other laws in France. We summarize the main changes since June 1st.

The Energy Regulatory Commission said the price hike was partly due to increased demand in Asia and South America and higher prices for CO2 emission allowances in Europe.

If you live in the departments numbered 20-54, you have until midnight (June 1) to file your tax return online for income related to the year 2020. After that, you risk penalties.

Residents of departments 55-976 have an additional week, the deadline being June 8.

The deadline for paper returns across France and declarations from non-residents has now passed.

The summer sales for stores (Sales) will now begin on June 30, and not June 23, the Minister of the Economy confirmed this week. Sales will last four weeks.

This delay is due to â€œthe economic consequences of the Covid-19 health crisis on traders,â€ the government said.

Diesel vehicles prior to December 31, 2006 and petrol cars prior to December 31, 1996 will no longer be allowed to enter Greater Paris (inside the A86, the Low Emission Zone (ZFE)) between 8 a.m. morning. and 8:00 p.m. on weekdays, except public holidays. They have already been banned from central Paris for two years.

These vehicles will carry a Crit’Air 4 category sticker. However, the penalties for breaching this rule – a fine of at least â‚¬ 68, decided by video – should not be applied before the end of the year.

Double authentication for almost all payments

Almost all online payments should now be subject to ‘two-factor authentication’, meaning that two proofs of identity will be required when making a purchase.

These can include a password or secret word, text on your smartphone, or biometric verification (fingerprint, voice or facial recognition).

Companies have until June 15 to adapt their systems.

Extension of the housing and employment guarantee (Visale)

Access to the Visale (Visa for Housing and Employment) should be extended to all workers earning less than â‚¬ 1,500 net per month. This applies to 6 million people, the government said.

Visale is a free service to help eligible people to rent main accommodation, furnished or not, if the cost of accommodation is not more than â‚¬ 1,300 (or â‚¬ 1,500 in Ile-de-France) per month. It guarantees that the landlord will receive payment for rent and bills.

It was previously only accessible to people under 30 and workers over 30 under certain conditions.

Newly eligible people will have access to the online application platform no later than June 3 or 4, said Housing Minister Emmanuelle Wargon.

However, three industries will benefit from an extension due to the severe impact of the pandemic: hospitality, restaurants and events.

End to take a break from winter evictions

The ban on winter evictions of tenants (and the blackout of electricity and gas) was supposed to end from March 1, but was extended until June 1 due to the health crisis. Evictions can now legally restart.

The charity AbbÃ© Pierre Foundation said 66,000 people were now at risk of becoming homeless. Housing associations and charities had called for the extension to last until July 20.

The government has called for a “gradual transition” this year, however. In a statement at the end of April, he said: â€œIf an eviction is to take place, it must be accompanied by the offer of alternative accommodation or, if not, additional time to find another solution.

â€œThe most vulnerable households, from a health or family point of view, will be allowed to stayâ€¦[and the state] will promptly compensate all affected owners for the sums of money they can legally claim. “

Opening of borders with Algeria

After a year of closure, the borders of airlines to Algeria from France are now open. Passengers will have to pay for Covid tests on arrival and self-quarantine for five mandatory days at a hotel chosen by authorities.

From June 1, Google will limit the storage of Google Photos to 15 GB. Users in France can increase their storage capacity to 100 GB for â‚¬ 20 per year or â‚¬ 2 per month.

The online video platform changes its terms of use from June 1. Ads will appear before all videos played, whether or not the channel is monetized. Non-monetized channels will not receive any revenue for ads that run before their content.