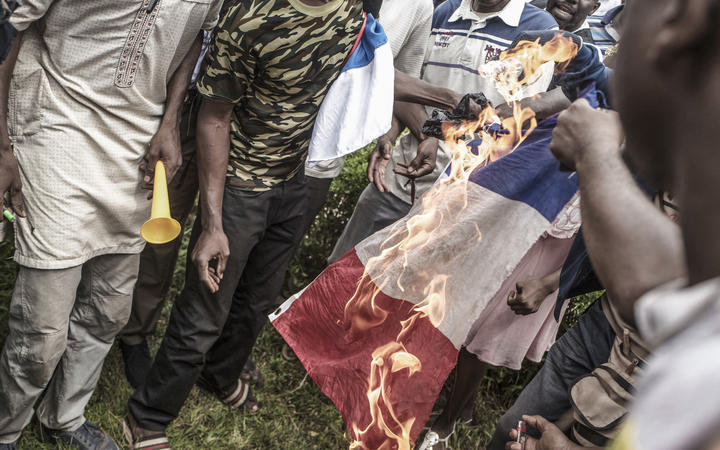 Why France is facing so much anger in West Africa

Analysis – Paul Melly * of the Africa Program explains where things went wrong for France in West Africa and why the European nation seems so unpopular in Africa.

Protesters burn a French flag in Bamako, the capital of Mali, during a demonstration against French influence in the country.
Photo: AFP

French President Emmanuel Macron has increased aid to the continent, started the return of cultural objects stolen during colonial wars, and moved beyond usual intergovernmental ties to involve younger generations and civil society.

He has kept French troops in the Sahel to fight the jihadist militants who are killing so many local civilians, police and soldiers, and has supported the regional Ecowas bloc as it tries to defend electoral politics against military takeovers.

This year, he flew to Rwanda to publicly recognize the French failures during the 1994 genocide.

However, his country is today the target of complaints and sharp criticism from Africa on an unprecedented scale.

Last month, a convoy of French troops heading north to support the fight against Islamist militants was repeatedly blocked by protesters as it passed through Burkina Faso and Niger.

In September Malian Prime Minister Choguel MaÃ¯ga was greeted with a wave of sympathetic comments when he used a speech at the UN to accuse France of “abandoning his country in full flight” after Macron began to reduce the deployment of troops in the country.

Among progressive West African commentators and urban youth, it is now common to hear calls for the abolition of the CFA franc – the regional currency used by many French-speaking countries and which is pegged to the euro under a guarantee of the French government. Critics say it allows France to control the economies of countries that use it, while France says it ensures economic stability.

What explains this paradox? How is it that a president more concerned with Africa than his most recent predecessors, and also more aware of the evolution of the continent, meets a level of French unpopularity that had not been felt for decades ?

After 13 French soldiers died in a helicopter crash in Mali in November 2019, he demanded that West African leaders travel to France for an emergency summit, an explosion seen as neocolonial arrogance, d ‘especially since Mali and Niger had recently suffered much heavier military losses.

President Macron was forced to make a quick course correction, flying to Niamey, the capital of Niger, to pay tribute to the dead Nigerien soldiers and postponing the summit until January 2020.

But the causes of France’s current malaise also date back decades before Macron’s election in 2017.

â€œWe can cite historical controversies linked to colonization. Many of us are the children of parents who experienced the colonial period and its humiliations, â€explains Ivorian political scientist Sylvain Nguessan.

During the first decades of post-independence, France maintained a dense network of personal links with African leaders and elites – nicknamed “franÃ§afrique” – who too often slipped into mutual protection of vested interests, without too much worry about human rights or transparency.

Among the outside powers, Paris was far from being the only one to come to terms with dictatorial allies, but its relations were particularly close and unconditional.

The most devastating failure occurred in Rwanda in 1994, when France failed to act even as its ally, the regime of then-President Juvenal Habyarimana, began planning for genocide.

From the mid-1990s, several governments worked to reform France’s engagement with Africa and give more priority to development and democratic governance.

But the momentum then faltered.

Nicolas Sarkozy began his mandate as president in 2007 by noting, with a spectacular lack of tact, that “the African man has not made enough history”. He favored former allies like the Bongo family, which has governed Gabon since 1967.

When Francois Hollande became president in 2012, he had no choice but to focus on security issues in the Sahel – a strip of land south of the Sahara Desert. He never really had the political strength to relaunch reform efforts.

But with Macron’s rise to power, France had a president fully aware of the need for change – and with the political clout and personal enthusiasm to tackle the task.

In 2017, he told students in the BurkinabÃ¨ capital, Ouagadougou, that France would support reform of the CFA franc if African governments wanted to. He also invited civil society, youth and cultural figures to this year’s France-Africa summit in Montpellier, rather than the usual flock of presidents.

Yet his willingness to speak clearly, question old structures, and question comfortable assumptions has not always played well, even among those pushing for change.

In addition, the situation in the Sahel has deteriorated into a festering wound.

The French military presence is fueling an increasingly widespread resentment in West Africa.

Despite a massive and sustained military effort – with more than 5,000 troops deployed and more than 50 killed – France was unable to decisively defeat the threat from the jihadists, including attacks on local communities and forces. security continues.

The reasons are complex, both military and social, environmental and economic.

Yet a significant portion of local public opinion believes that France, as a high-tech Western military power, should have been able to “fix” the problem and should now step aside if it fails to do so.

These feelings seem to have motivated the demonstrators who blocked the French army convoy.

And this comes after previous causes of resentment, as Nguessan underlined: â€œThe speeches of Sarkozy in Dakar, of Macron in Ouagadougou; the war in CÃ´te d’Ivoire; the disheartening results of the campaign against terrorism.

But underlying social and community factors also shape the attitudes of some.

A senior Sahel army officer said he viewed the French as allies of former Tuareg separatist rebels in northern Mali – an allegation fiercely and credibly denied in Paris.

Similar complexities surround France’s support for the West African regional body Ecowas – which is currently trying to pressure the coup plotters in Mali and Guinea to quickly return their countries to civilian constitutional rule. .

A growing number of young people see the regional bloc as a club of sitting presidents, too slow to criticize civilian leaders who manipulate democratic rules and unwilling to recognize the strength of popular support for military leaders promising reforms.

Thus, by supporting ECOWAS as a legitimate African crisis management institution, France ends up being seen as an accessory to the establishment of the old guard.

* Paul Melly is a consultant member of the Africa program of Chatham House think tank in London.

Most Popular 2021 Christmas Ads Revealed, Including Tesco, M&S and More